SuperMoney. Is this the Jesse Stockwell Spin Machine? 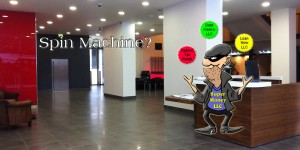 SuperMoney at first-look appears to be an independent website with financial information for visitors. Way down at the bottom of their home page we found an ‘About Us’ link. That leads you to another link, then to the following page. There you will find that SuperMoney is another business in the family of businesses owned and operated by Jesse Stockwell. As pages seem to disappear, we saved a pdf facsimile available here.

Reprinted with permission from uswatchdogs.net.

“Caveat emptor’, let the buyer beware. Supermoney.com certainly appears to us to have been created for one reason: to show what Jesse Stockwell wants you to believe is an independent website that has nothing but high praise for Jesse Stockwell’s companies, Debtmerica LLC and Optima Tax Relief LLC. On the Supermoney website on the review menu, we clicked on “Debt Settlement“. Surprise! Debtmerica is at the top of the list with a 100/100, 5-star rating. We then clicked on “Tax Relief“. Surprise again! Optima Tax Relief also has a 100/100, 5-star rating. What’s next? Anyone interested in buying this bridge in Brooklyn?

But, you say, Jesse also has other debt relief and tax relief companies on his SuperMoney website. While that is true, we warn you to look for the truth. Rather than us telling you, just look at the New York Attorney General’s Assurance of Discontinuance and you will see that Debtmerica LLC was specifically charged with co-defendants with whom they were sharing profits and fees, such as Freedom Debt Relief LLC and Century Negotiations Inc. Do you wonder as we do if other debt companies on their SuperMoney website may also have fee and profit sharing arrangements with Jesse’s’ companies?

The ‘team’s’ other company, LoanNow, charges customers 49% to 189% interest, or should we say vig, on loans.

Although LoanNow is not yet a “featured” company on SuperMoney like Debtmerica and Optima Tax Relief, we have a sneaking suspicion it will be in the future.

Before you do business with Jesse’s companies, do a little research. Do you really think that every person who wrote about one of Jesse’s companies gave it a five star rating? Pick a few random user posts, the ones with those five stars (all of them) and we bet you will notice as we did that they all appear to have been written with the same pen. Finally, write a negative post about any of Jesse’s companies and we will wager that just like us, it will be gone from the website within 24 hours without a trace or explanation.

We leave you with a cautionary tale, purely fictional, that we hope gets the point across. Namely that, “it could happen to you”.

Some poor working stiff who, based on Jesse’s neighborhood demographics is probably Mexican-American, comes to LendingPoint Mortgage where Jesse sells him on the American Dream. He buys a home that he can’t afford via a junk mortgage Jesse signed him up for. The whole U.S. economy then blows up, primarily because of junk mortgage companies like Jesse’s. The poor working stiff loses his home and moves in with relatives. He can’t rent because his credit is now ruined. Jesse comes to the rescue! This time with his new company Debtmerica LLC. Being of a very proud heritage, our poor working stiff signs up to repair his credit rating so he can rent a home. Now according to the New York Attorney General, our poor working stiff makes his payments for a year or so, thinking he is paying down his debt. He then finds out that he has tax problems as the IRS says the debt settlement deduction is taxable income, so he now owes the IRS. To the rescue, Jesse signs him up with another of his companies, Optima Tax Relief LLC. The poor working stiff’s TV and Computer got repossessed so he never saw the warning on the IRS Website or the Fox Business Special on “tax Relief Scams”. Meanwhile back at his relatives’ house, according to the Attorney General, while our poor working stiff has made all of his payments to Debtmerica for over a year, not one payment was made to his creditors! All of the money he paid has gone to Jesse. A sheriff comes to our poor working stiff’s door representing the creditors. But once again, our poor working stiff has Jesse in his corner and this time Jesse signs him up with a 189% loan from LoanNow to pay the creditors who didn’t get paid. But how did all of this happen? After all, our poor working stiff, before his computer was repossessed, checked out Jesse and all of his companies at an independent authority called SuperMoney and he didn’t have even one bad review. If he only knew that SuperMoney was also one of Jesse’s companies, but he found out too late.

Disclaimer: jessestockwell.net and optimataxreleif.biz are in no way affiliated with jessestockwell.com, optimataxrelief.com nor Debtmerica LLC and in fact are provided to show facts about these companies not available from their or their associated websites. The rest of the story so to speak.